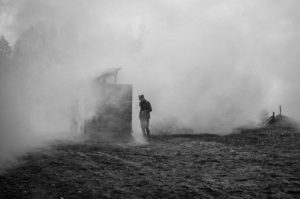 A client in Arkansas called me about Past Life Regression for Insomnia and told me that she had been to see a past life therapist in Phoenix several times. The first time she discovered she had drowned in a past life and her asthma symptoms went away. In the next session she discovered she died of dysentery and her problems with irritable bowel syndrome cleared up.

She called me to ask about insomnia and said she was convinced it was related to a past life. I did not have a clue how her Past Life Regression for Insomnia session would turn out, but we decided to see what we could discover in her session.

Before we started the Past Life Regression for Insomnia session she reported that she has never been calm her entire life. As a result she got very little sleep at night. She also let me know that way back when she was 2 years old in the early 1960’s she used to have visions of fighting, war and blood, in color.

Past Life Regression for Insomnia

She found herself in France in World War I fighting a losing battle. She was an American man and when they got the retreat order he began to run back to the main base. When I asked how can you find your way, I was told, I have my compass. As long as I have my compass I can find my way back to the base.

It took a day or so to get all the way back, but he made it. Initially they thought he ran away from the battle, but when several others fighting with him showed up they validated the retreat order. He got several promotions and eventually became what we might call a special ops hit-man. He was sent to spy on groups of German soldiers, infiltrate their camp, kill the leader and escape unharmed.

He must have done a good job because he made it back to Kansas after the war. He was pretty stressed out after that experience and ended up living out his life alone on his farm where he helped others by repairing tractors. He slept with his gun under his pillow and was a light sleeper. He had what we would call PTSD which led my client to call me about Past Life Regression for Insomnia.

After her session when I mentioned Kansas, she said she saw a sign that said Olathe. She spelled it out and I found it on my phone. Neither of us had ever heard of Olathe, Kansas, but there is was on the map.

The next day I woke up to an email, It worked! She said she had a great night sleep, the only problem was she felt drugged because up until that night she had never slept 8-9 hours in her life. That was in 2015. We keep in touch about 2-3 times a year and she is still sleeping well every night.

The night she initially called about Past Life Regression for Insomnia, I presented a Group Past Life Regression in Jefferson, Texas. One of the participants told me the next morning that he was a pirate who drowned in a his past life experience. Based on what I said to the group, he realized that his asthma was a result of drowning in that past life as a pirate. He even experienced the feeling of the salt water going down his throat. His asthma is a thing of the past.